Mom, I thought you said grapes were expensive, these are only $2.99! But that’s per pound dear, and the bunch you’re holding is about three pounds. If you can afford to renovate the kitchen why can’t you buy me a computer of my own?

While peering over your bifocals at your very bright teen, it is easy to assume he should know better. Yet, very little can replace life experience in figuring out how money works, so many teenagers have mistaken ideas about money.

But work like a dog, live paycheck-to-paycheck and soon those $150 running shoes don’t look so great. As parents, we need to find a balance between supporting our kids financially and supporting their learning how to manage money. This can create a tug of war on the parental purse strings so putting some thought into this complex subject makes “cents.”

When my kids were young they were given an allowance every two weeks. There was no expectation that they contribute some to charity or that they save a portion. It was their money; in order to learn, they needed the freedom to spend it all on dumb things. And they learned that when you spend it, it doesn’t magically reappear. They also learned to appreciate things more when they saved for them.

When they reached their pre-teens, their allowance increased in proportion to their needs. They were going out with friends more, renting movies and, in my son’s case, saving for ski trips and expensive equipment. Of course, we still bought their clothing and met them halfway with certain things, but we were releasing responsibility slowly.

At some point it seemed the IPods, MAC Makeup, cell phones and expensive clothing were appearing too often on the list of “have to haves.” My husband and I found this stuff hard to relate to, since our generation played with Etch-A-Sketch and tetherball sets. Yet, I remembered having to have the cool running shoes with three stripes (not two). In my young teenage insecurity, that extra stripe truly felt like a need. I couldn’t articulate then that my real need was to belong and feel comfortable within my peer group but now I can see that need in my kids. A big part of the teen years is finding a sense of belonging, and sometimes the perfect eye shadow or skateboard plays a part.

Of course, all families are different; even different children within a family may have different money issues. But regardless of these differences, a kid will not learn about money if her parent’s wallet is a bottomless pit or if the parent provides no money for her to learn to manage.

As parents, how can we support our kids without overindulging them? How can we alleviate power struggles over money? How can we help them learn the value of a buck? Is a part-time job the answer? What about schoolwork, time with friends and the need for sleep and down time? Kids who have “McJobs” often don’t have time for these important things.

When a child reaches his teens, he can benefit from a chance to manage money beyond his allowance. Parents who can afford to can give teens a “living allowance.” This is an amount of money that represents the average of what a parent might spend monthly on larger items. It is not something that parents begrudge and resent. It is a reasonable sum, both realistic and fair. Parents give the determined amount to the teen and explain that they will not be negotiating giving or lending more money or rescuing him when he overspends.

A living allowance is “earned” by displaying accountability, readiness and an ability to make decent choices. It doesn’t mean parents don’t allow for mistakes but that your child has an overall sense of responsibility. Every family can put their own twist to this. We expected my son to cook an extra meal every week so he could brush up his culinary skills beyond frozen pizza and spaghetti. My daughter was and continues to contribute to the community with volunteer work. We felt that was an extra, valuable responsibility.

A colleague gave his kids a living allowance but fined them $5.00 if they missed their night on dishes or continued to leave the bathroom in a mess. They rarely went back to the basic allowance; money seemed to motivate them.

A caution: think twice about taking your child’s basic allowance away. Teens need money and they can find very interesting ways of creating what they need.

My son just graduated from high school. He has had part time jobs since he was 14 and he bought some really special things with his money. We gave him a living allowance throughout his teen years regardless of his employment. Now we have a sense of sadness as we release our financial protection. He is moving into the next phase of life; while we are helping him with college fees he now relies on part time work for everything else. He won’t be buying too many expensive items. Eventually he will either move out or start paying rent when college ends. We see this stage of parenting as more than issues about money; it is about learning, gratitude, relationships and helping our kids take responsibility so they can stand on their own two beautiful feet. 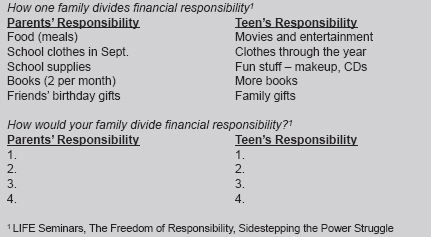